Those brave souls amongst you who follow this blog will recall that on a recent visit to the ‘farm pond’ I had a tantalising encounter with a potential Monster of the Deep. Obviously not quite in line with Jeremy Wade and his freshwater leviathans, but something significant all the same. 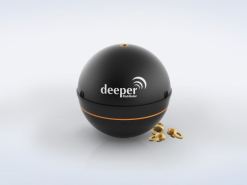 A few weeks ago I became the proud owner of a lovely little gadget – a Deeper Pro+. For those of you who don’t what I’m on about it’s a WiFi enabled fish-finding sonar doo-dad that connects to your smart phone and tells you what’s going on beneath the surface.

I also got myself a rather luxurious 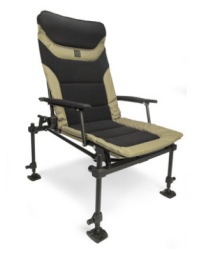 Korum Deluxe Accessory chair, but that’s for another post.

So a few days after unpacking the little widget I found myself down at the pond, casting it here and there and building up a reasonably good idea of the topography of the bottom of the little lake. It soon became clear that there was a rather pronounced shelf where the depth went from about 1.8m to a rather more impressive 3.2m. After a bit more casting about I had it pretty much figured and decided that this was to be the beginnings of my strategy to haul out whatever decent fish were lurking in there.

Most of what I’ve gleaned since my return to angling has told me that in the colder months the fish will generally seek out deeper water as it tends to be the warmer bit (something to do with Thermoclines I believe), so on my return to the pond just before Christmas I was able to actually DELIBERATELY target my quarry!! A whole new concept for me I can tell you. Prior to this I had pretty much been hunting around for likely looking spots and casting out in the hope that a fish would take pity on me and sacrifice itself up for the good of my ego. Not so this time – I was actually doing the whole ‘thoughtful angler targeting his quarry’ thing – Martin Bowler would be proud!!

So for those who want to know, I was using a Drennan 12ft Feeder Rod. The business end consisted of a free running lead clipped onto one of those cool little Feeder Bead thingys. The hook length was about 60cm of Fluorocarbon with a size 12 on the end and a hair rigged 8mm pellet. On the advice of my local tackle shop guv’nor I also threaded on a golf-ball sized PVA mesh bag containing more 8mm pellets and some Hemp seed. The whole lot was cast out into what I now knew for sure was the deepest part of the pond, right at the bottom of the shelf. I poured a coffee from the flask, sparked up a fag and settled in for the wait.

Before I could finish the coffee and with the ciggy still dangling from my bottom lip the rod tip started to quiver – a few little tremors, a slightly bigger knock, and then it went proper mental!! I lifted into it and straight way knew this was something a bit more than the sardine sized blighters that I’d previously been catching. After a tense few minutes I was looking at this beauty.

1lb and 5oz of your finest farm pond Roach – and I caught it ON PURPOSE!!

After a somewhat embarrassing bankside victory dance (imagine Homer Simpson impersonating a cheerleader…) and another coffee and ciggy to calm me down I baited up and cast out again. This time I had to wait a whole 10 minutes. And this time it was a proper ‘YouTube’ style wrap around pull of a bite – obviously not a Roach this time.. 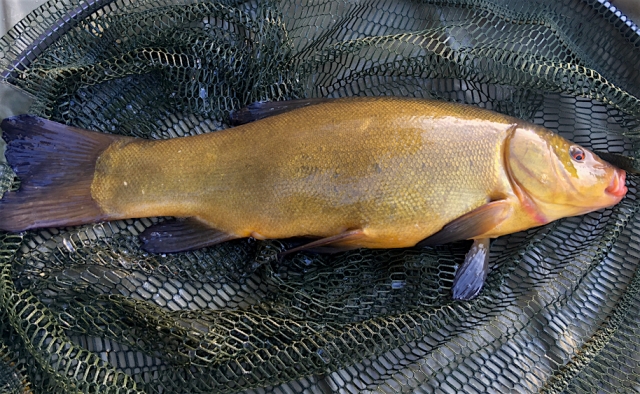 Tinca Tinca…. a 3lb 4oz Tench, in DECEMBER, caught by me!! I was speechless.

I almost decided to pack up and go, as it couldn’t get any better (and I was bloody freezing) but thought better of it. Another ten minutes and the third and final beastie found it’s way into my net and onto the bank.

This one weighed in at 1lb 3oz. I do love the way they look slightly sheepish – almost as if they’re slightly ashamed at getting caught.

To say I was well chuffed would be an understatement – I was uber-chuffed.

Now amongst all this silliness I have to say that I do realise that a couple of 1lb + Roach and a 3lb + Tench are not really anything to write home about. However, for this angler, who genuinely hasn’t got much of a clue and relies almost entirely on what he can find on YouTube, these three fish represent a serious milestone in a so-far very short angling career.

And so I’m busy right now making plans for the next visit to try and tempt some of their brethren into my net. I’m also now living in the firm belief that if I’m able to find fish like these in the pond there must be some ‘real monsters’ in there…….somewhere.

One thought on “Things are looking up…..”